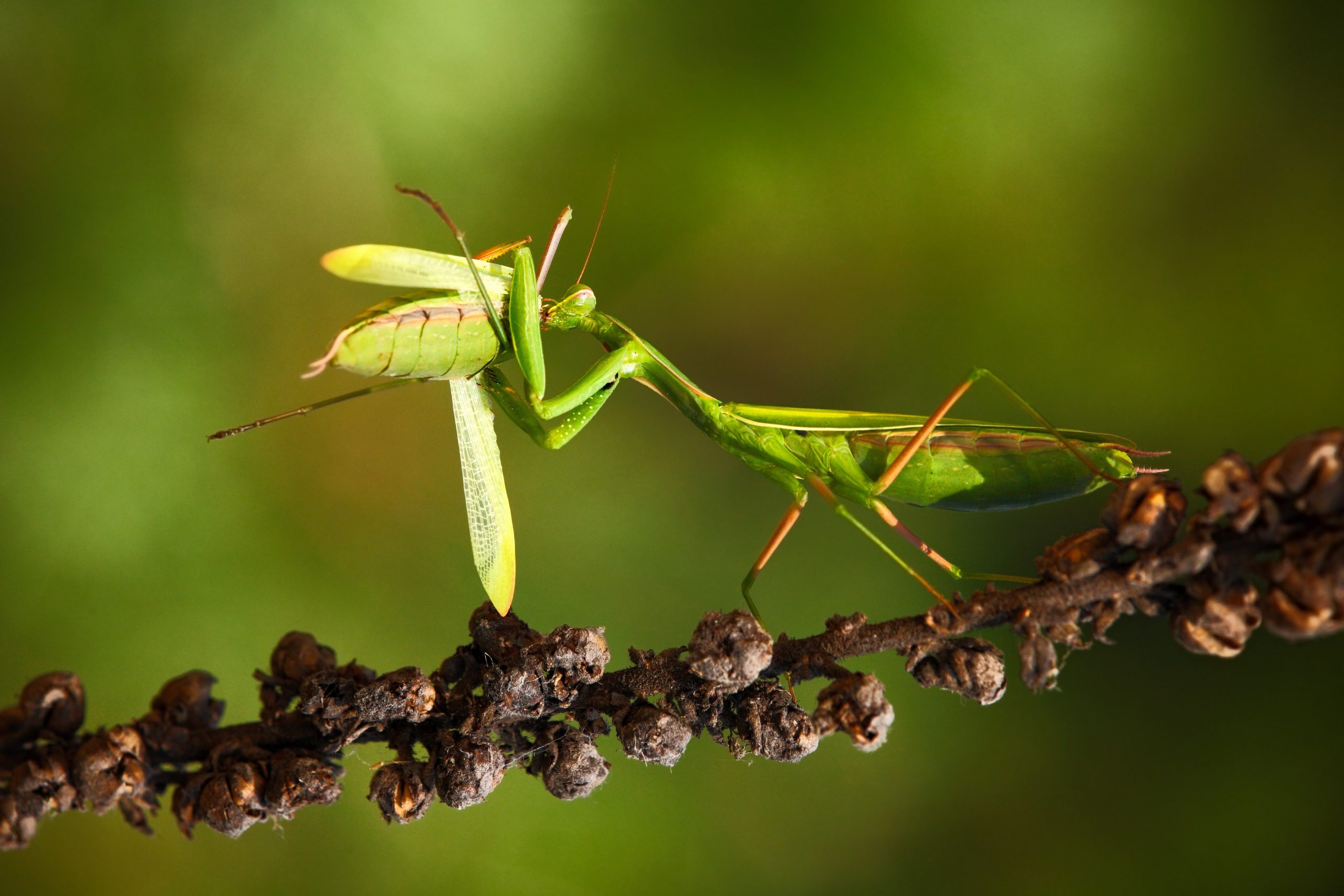 Sexual cannibalism represents perhaps the most extreme form of conflict between the sexes.

This kind of behaviour is observed in several species of praying mantids and spiders, and there is tremendous diversity in the extent to which it occurs.

Females have much to gain, and potentially much to lose, by being sexually cannibalistic. If she plays it right, a female can enjoy the benefits of a male’s genetic donation, his nutritional nuptial gift, and then, his entire body.

However, if she takes her cannibalistic tendencies too far, she may risk not finding a future mate.

There is a set of factors to be considered any time there is the potential for cannibalism. Circumstances including the state of the current resource availability (either food resources or male resources) and the quality of said resources are critically important.

Ideally, a female should be able to weigh all factors involved and make appropriate decisions based on ever-changing ambient conditions.

In reality, this seldom happens.

In fact, it’s quite common for female spiders to cannibalize males before any copulation has even taken place.

So-called pre-copulatory sexual cannibalism is rampant and there is a substantial set of hypotheses to explain it.

A girl’s got to eat

During times of severe food shortage, it makes sense for female spiders to partake in cannibalism to ensure they have enough to eat. In most sexually cannibalistic species, females are larger than males, so catching, subduing, and ingesting them is not a problem.

Removing temptation, by eating him

A female may want to remove undesirable males from the gene pool in order to prevent herself from mating with them and potentially lowering her own biological fitness.

Females may misidentify males of their own species, treating them as dinner rather than as sex partners. Several species of predatory spiders prey on other spiders with similar physical, behavioural, environmental, and chemical aspects of their biology.

The “aggressive spillover hypothesis” posits that some females are genetically predisposed to indiscriminate aggression, which results in them being formidable predators, and consequently makes them quite large and fecund.

However, the aggression that makes them such effective predators also makes them particularly aggressive towards potential male suitors.

This results in murderous rampages instead of courtship and copulation, but more on that in a future blog post.

Why would a male allow himself to be eaten?

It’s been documented that sexual cannibalism increases a female’s attractiveness to a male.

It seems counterintuitive, but on closer examination it makes biological sense. Approximately 38% of the time, females cannibalize their first “mate” prior to copulation. This number drops substantially for future copulations – only 5% of females undertake a second victim prior to mating with him. The primary way he can identify whether a female spider has mated or not is by her pheromones.

Biologically speaking, a male would be making a smart choice to pair up with a cannibal because chances are she’s not going to cannibalize again. Since she’s already had a nutritious meal (ie, the first mate), her chances of laying a viable egg case are substantially increased.

So long as a male isn’t the first one to tap into an aggressive female, he’s setting himself up well to try to mate with a cannibal.

It’s not necessarily a bad thing to be cannibalized. Although it’s a stretch for the human male to envision when it would ever be strategically advantageous to allow himself to be killed and consumed, for several species of spiders and mantids who will only ever get one or two chances at reproducing anyway, putting all of one’s reproductive potential into one or two matings makes a lot of sense.