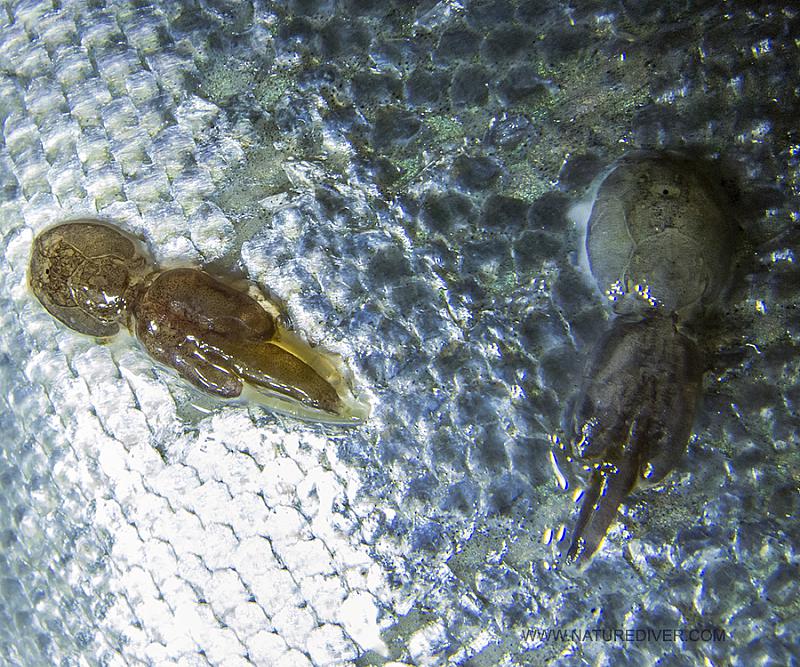 The salmon louse (Lepeophtheirus salmonis) is a common parasite of many salmonid fishes. A heavy load of lice, commonly called sea lice, can have dramatic negative effects on the ability of the fish to survive and reproduce. This copepod attaches itself to the external surfaces of juvenile fish. It is responsible for erosion of the dermal tissue and for draining blood (energy) directly from the infected fish.

Biologists studying this have noted that fish with significant infections return from the ocean to freshwater much earlier than those without.

There may be specific advantages to the infected fish for doing so. Sea lice don’t survive much longer than one or two weeks out of the ocean. The change of salinity between salty sea and freshwater river is too much for their physiology to handle.

In addition, the sea lice are unable to change hosts in freshwater, making their demise in this environment more likely. At the same time, this increases the survival abilities of the salmon that return there early.

The survival benefits realized by the salmon due to the downfall of the sea lice are reinforced by an indirect advantage once the infection has cleared. The osmoregulatory abilities of the fish are negatively affected by the lice. Living in the saltwater habitat is extremely costly in an energetic sense, because osmoregulating is a costly process in the more saline environment. By moving to freshwater, the salmon decrease their levels of lice infection and move to an environment where osmoregulating is much easier.

Experimentally infected sea trout (Salmo trutta) smolts were found to have a high rate of return to estuarine areas from where they were released compared to control smolts that were not infected.

Several salmon species such as pink and coho (Oncorhynchus gorbuscha and O. kisutch respectively) with substantial infections have been observed returning to freshwater at an earlier stage in their life history than they would otherwise.

In laboratory experiments designed to determine the environmental salinity preferences of infected vs. uninfected pink salmon, researchers found disparate preferences between the two. When salmon could choose between a freshwater and a saltwater habitat, infected fish more often selected the freshwater habitat.

Disadvantages of Moving to Freshwater Early

It seems simple. If you’re a salmon infected with sea lice, move to freshwater. However, nothing in the world of biology is without its costs.

This change of venue may benefit the salmon in terms of infection and osmoregulation. However, this anadromous fish normally spends most of its life in a salt water environment. In a salt water habitat, it can grow to a much larger size. Salt water contains a whole lot more food. It is possible for a small fish to survive, but with a higher risk of predation and a significantly reduced fecundity. The smaller you are, the less space there is for egg or sperm production.

While it may initially seem like an obvious choice, there are significant costs to the salmon for an early move to freshwater. As with most choices animals make, the costs and benefits must be considered in terms of the ultimate goals of survival and reproduction. Still, you cannot hope to survive and reproduce if your health is significantly compromised in your current location.