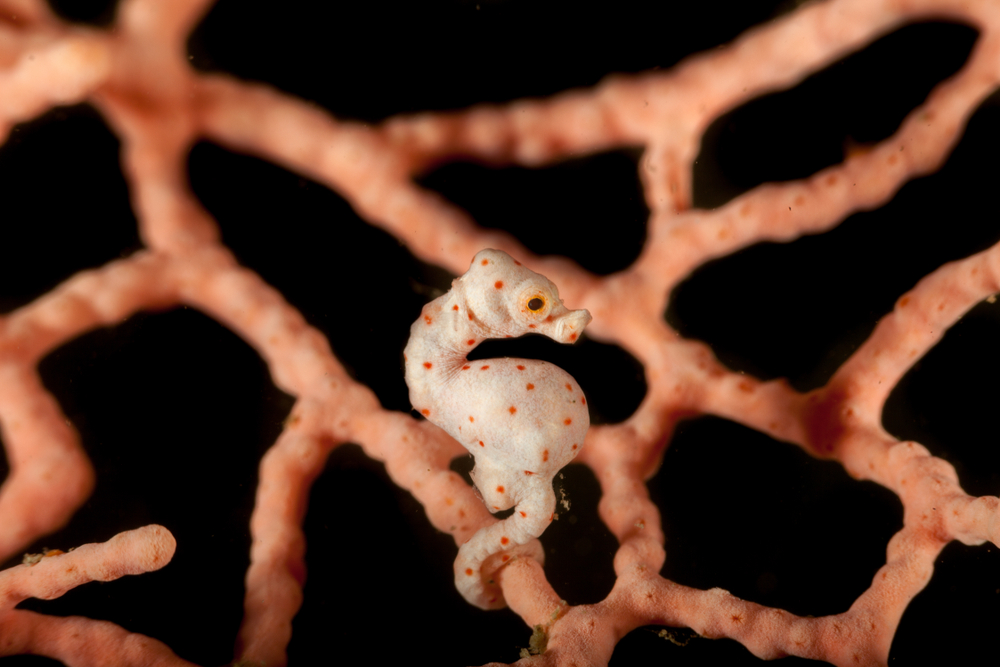 A certain level of sex-role reversal is observed in insects, amphibians, and birds, but nowhere is it more clearly developed than in the seahorses and pipefishes. In these species, males get pregnant and give birth to live young.

Syngnathid fishes are best known for being sex-role reversed. Although the possibility of lactation in male mammals is tantalizing, we don’t yet know enough about how it functions. A system for which we do have an abundance of data is that of the Syngnathid fishes.

How Do Males Get Pregnant?

Males of all species within the Syngnathidae receive unfertilized (yolk-rich) eggs from females in what is essentially their act of copulation.

The eggs are then fertilized and stored by males in a wide range of structures from simple attachments on his ventral epithelium (belly), to partial cover by extended epidermis, to highly complex brood pouches.

Seahorses in the genus Hippocampus possess among the most complex brood pouches. We can say beyond a shadow of a doubt that these males actually get pregnant. Far from being a mere storage area for eggs, brood pouches (and the males that possess them) have important functions in aeration, protection, and osmoregulation of eggs.

The male is also able to physiologically transfer nutrients to developing offspring, indicating that his investment in a brood is substantial. This makes sense from an evolutionary perspective for the key reason that females transfer their eggs to males unfertilized.

Having 100% certainty of paternity appears to make all the difference in promoting the evolution of sophisticated paternal care in the Syngnathidae.

In Place of Placenta…

In mammals, mothers provide immune factors to developing offspring through the placenta. This is called trans-generational immune priming, and it’s critical for embryos to be able to fight off microorganisms and other pathogens once they have been born.

The most sophisticated Syngnathid brooding chambers have additional tissues to provision developing embryos with nutrition and with complex immune factors, akin to the function of a mammalian placenta.

The Female Role in Sex-Role-Reversed Species

On one hand, sex-role reversal should lead to fairly predictable ecological scenarios. Since it’s the males that are undertaking a huge investment in brooding the offspring, males should generally be the choosy sex and females should be competing for their affections. In several instances this is exactly what is observed: females of many species have complex and remarkable structures that are clearly the result of sexual selection.

Adornments can take the form of:

However, there’s an extremely important part of the puzzle that we cannot forget when discussing the relative investments of male and female Syngnathids: females are still contributing yolk-rich eggs.

In addition to having to compete for males’ affections through either deterring other females or having a well-developed ornament of some kind, the ladies still have to produce the expensive gamete. This could be why we do not observe sexual structures with the complexity and extravagance of those observed in the avian world (think peacock).

After all, a female has only got so much energy to work with. It is thought that females of the highest quality are those that can both display to males and escape from predation, without negative impacts on their fecundity. Females of lower quality are simply unable to juggle this extremely large set of biological demands.

We know that female birds can influence egg volume or clutch success based on the quality of the father. Male pipefish do something similar.

In laboratory experiments designed to assess a male’s investment in his brood after mating with high- versus low-quality females, male gulf pipefish (Syngnathus scovelli) demonstrated a clear ability to influence aspects of brood health.

They are able to adaptively affect their investment in broods, depending on the value of the mother who contributed the eggs. Males paired with high-quality females allow for a greater number of eggs to be transferred to them, and the offspring realize a greater probability of survival to parturition (birth).

Conversely, males paired with low-quality females experience higher rates of abortion (through re-absorption of tissues by the father). Since males are known to actively transfer both nutrients and immune factors to developing embryos, we can safely assume that they can also control the extent to which they withhold such compounds when faced with an unattractive brood.

Males of sex-role-reversed species are more likely to save their energies for investing in high-quality broods, in the same way that females of traditional species do.

Although the bulk of the animal kingdom is biased towards a larger role for females in the development and care of offspring, we can take heart in knowing that male Syngnathids are stepping up to the plate when it comes to providing their fair share of “maternal” care.

This post is an adapted excerpt from my book: “Wild Sex: The Science Behind Mating in the Animal Kingdom“