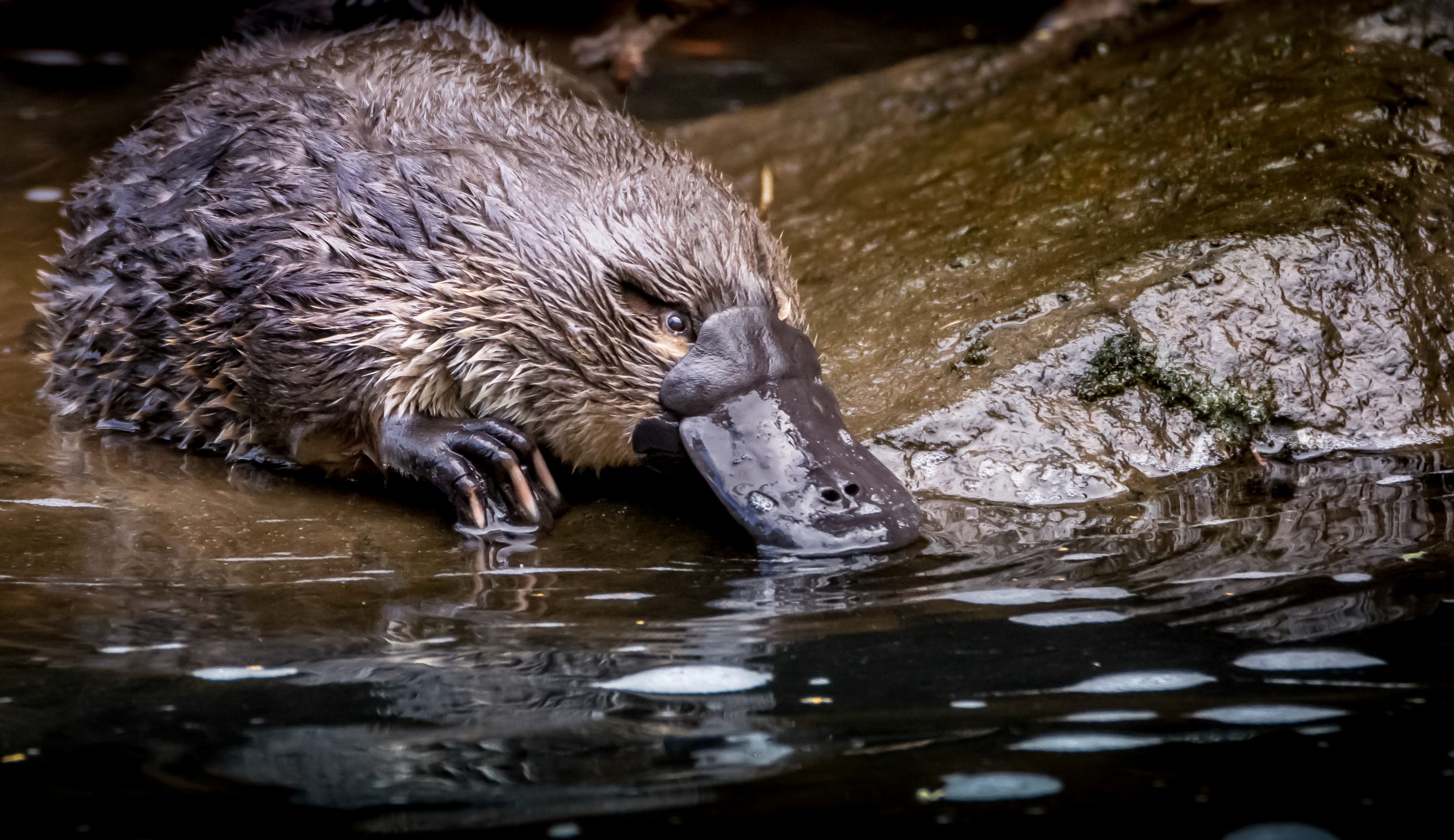 The developmental pathways of the platypuses of Australia and New Guinea are a combination of reptilian, avian, and mammalian characteristics.

Platypus mothers are physiologically specialized to produce both eggs and milk. They have a single urogenital opening for both reproductive and waste products.

Platypus mothers create underground burrows for the protection of both mom and her offspring. These burrows can reach over 26 feet in length, and they usually end in a spherical nesting chamber. Moms collect wet vegetation and keep it in the chamber to create a humid environment for the eggs and nestlings.

Platypus moms can incubate their eggs by holding them closely between their tail and abdomen. This is less common, as it prevents them from moving around extensively.

Eggs are incubated for a short period, just 10-12 days. They hatch at an early stage of development that is akin to a human giving birth during the first trimester of pregnancy. Neonates are moved by their moms from incubation burrows to nursing burrows and are constantly tended to by their mothers.

At this point, platypus moms and pups begin a very long lactational phase that lasts 114-145 days. Milk is dilute when it first begins to flow. This is critically important, as the digestive systems of the tiny newborns are not able to handle much else at such an early stage of development.

The milk becomes higher in fat and protein as the newborns become older and their digestive systems begin to mature.

Platypus and echidna moms are the only mammalian moms that do not have nipples. Milk secretion occurs through areolae on abdominal skin patches. These areolae are covered with fur or hair. Otherwise, the system of ducts and alveoli in the mammary glands is similar to that of other mammals.

As the infants grow and become stronger within the underground burrows, there is less of a requirement for moms to visit as often. Mom will eventually stop provisioning her babies altogether. This encourages them to become more and more independent.

It’s believed that the original functions of lactation in monotremes, a group of animals that includes the platypus and echidna, had nothing to do with nutrition. Instead, the dilute formula served to prevent eggs from drying out. In addition, its antimicrobial compounds worked to safeguard the offspring from infection as they hatched. Lactation has secondarily evolved to become a source of nutrition in these mammals. There is an abundance of antimicrobial compounds in the milk from the very beginning.

Tiny newborns suck on the areolae on the patches and obtain nutrient-rich milk and a plethora of antibacterial and antimicrobial compounds. Because the neonates have a very poorly developed immune system when they hatch from the eggs, the need for immune factors in the milk is tremendously high.

In addition to the lack of a physiological means by which to fight infection, the underground burrows undoutedly expose hatchlings to a high level of bacteria and other pathogens.