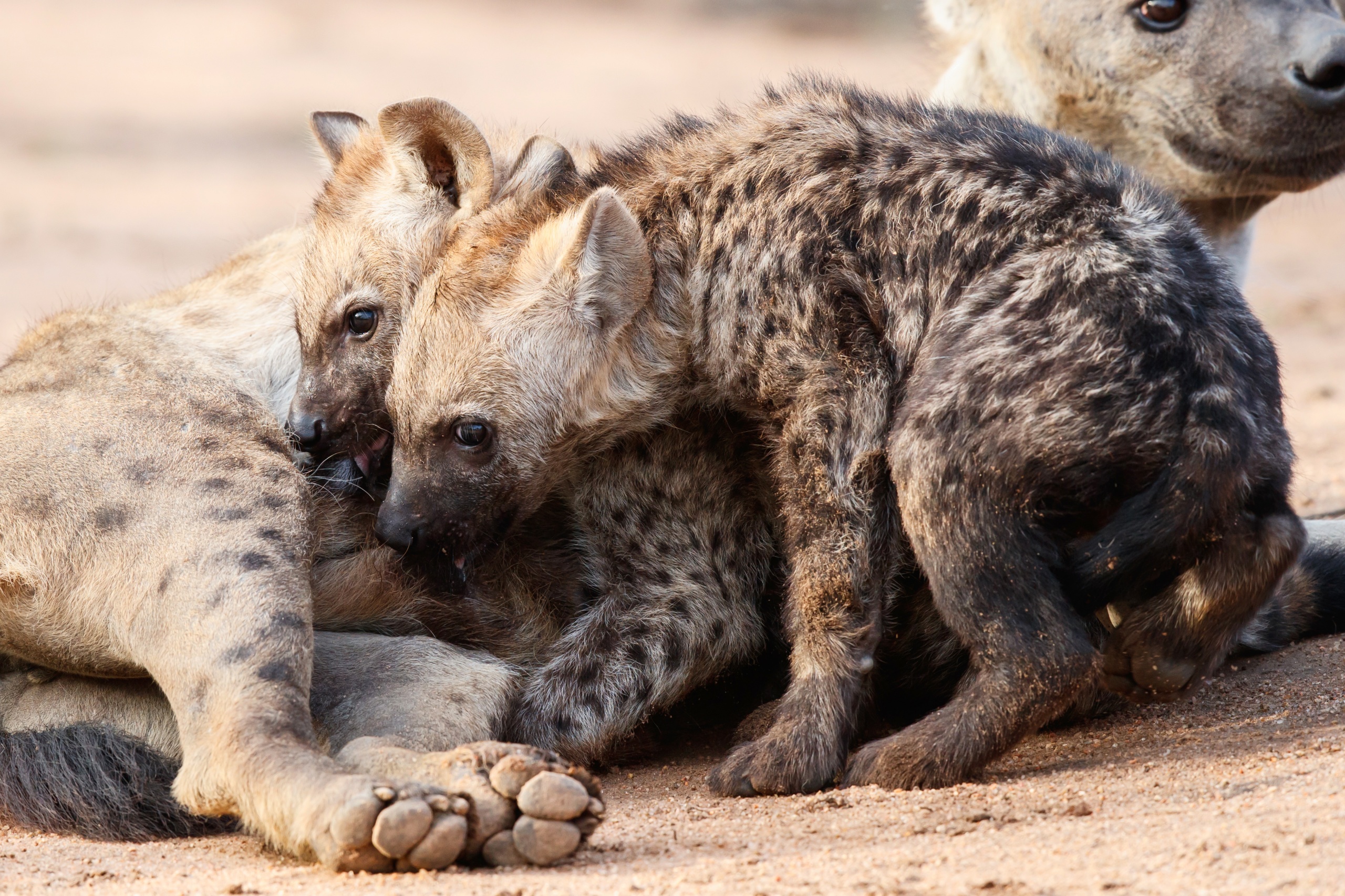 Hyena societies are matriarchal, which means that females are the socially dominant sex.

They live in groups of sexually mature females and their offspring. When young males reach sexual maturity they are kicked out of the group.

Adult males are low on the social scale. They aren’t generally permitted to socialize with the group, and often end up in small bachelor pods or as solitary individuals.

There is one alpha female within a hyena clan. Although there are many reproductive females in the group, the alpha is, without question, highest on the social scale.

Subordinate females and their offspring are socially submissive to both the dominant female and her offspring. This hierarchical structure sets the scene for complex lactation dynamics.

Pups feed exclusively on mom’s milk for approximately six months. They are generally weaned between twelve and twenty months.

The cost of lactation for spotted hyenas is generally high to begin with because their main prey species are migratory ungulates like gazelles and springbok.

When prey abundance is high, mothers can forage locally. This allows them to remain in close contact with their cubs in a common den. However, when their prey is absent from the immediate territory, mothers must embark on long commutes to find them. Such trips can encompass hundreds of miles. Mothers are not only absent for long periods, but they are also exhausted upon their return.

Whether a spotted hyena mother has to go on a long foraging trip to produce enough milk for her cubs is entirely dependent on rank.

When food is scarce, high-ranking mothers claim the nearby hunting territory. This forces the lower-ranking females to forage farther from the communal den.

Pups are sometimes forced to fast for up to nine days while mom is away searching for food. The long-distance foraging trips are stressful for low-ranking moms, as fecal glucocorticoid levels have demonstrated.

Not surprisingly, the amount of milk transferred to hyena cubs increases with decreasing social status. This reiterates that low-status moms are more often away from the den. Therefore, they provide larger meals to their pups upon their return. The quality of the milk also increases with decreased feeding bouts. Low-ranking moms provide higher amounts of high-quality milk, just at lower frequency feedings than high-ranking moms.

Growth studies have confirmed that pups receiving more frequent feedings from high-ranking moms have higher growth rates than those who are forced to fast and then have more nutritious meals.

Another unfortunate predicament for hyena mothers is susceptibility to pathogen infection. Mothers that continuously make massive commutes to feed their offspring not only experience a greater level of stress, they have a lower proportion of available energy for body maintenance and immunity.

Generally, as hyena social status decreases, the incidence of parasitic or pathogenic infection increases. This is a common issue for lactating mammals across the world, humans included. When one is performing the energy-intense service of lactation, there is simply less energy to be allocated to other metabolic needs.

The long fasting period between feedings experienced by pups in the litters of low-ranking moms can also affect their own relationships with siblings. Hyena moms usually give birth to twins, and from birth these pups have strong jaw muscles and sharp teeth.

Siblicide is common in hyena litters. The most aggressive pups are likely to obtain the greatest share of mom’s milk. Indeed, hyena moms often allow an aggressive pup to edge its sibling out of a meal time and time again until it starves to death.

In the hyena world, there is simply no room for a weakling. If mom is away foraging for long periods, pups are more likely to increase their aggression toward each other to be the one who feeds first upon her return.

Dominant siblings of low-ranking moms achieve higher amounts of milk consumption than their weaker counterparts. Although mom would ideally aim to maximize her biological fitness by keeping both pups alive, if resources are scarce she may be better off to allow the dominant sibling to starve the weaker one.