Ants Farm Aphids For Their Honeydew

Ants Farm Aphids For Their Honeydew 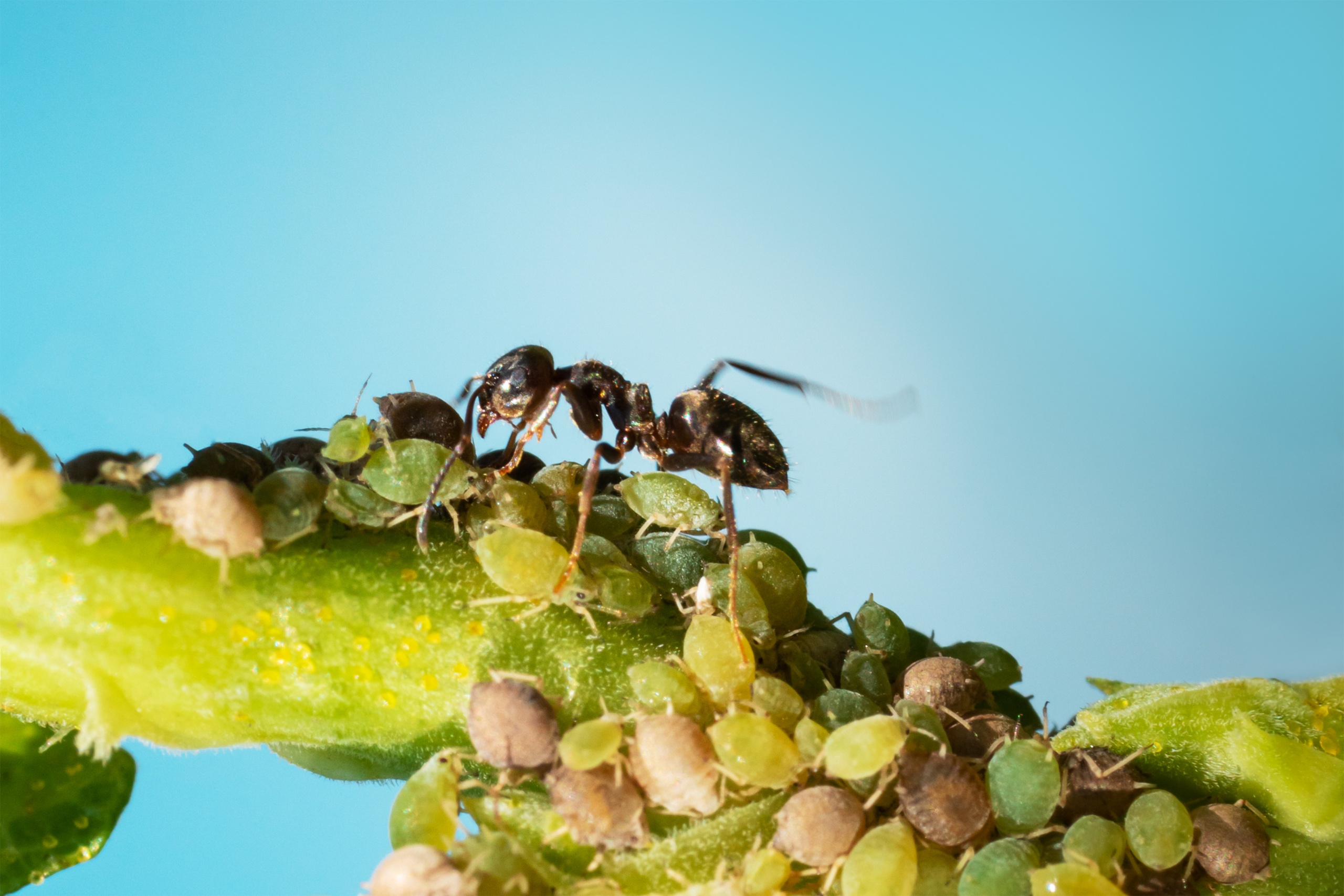 and on his farm he had an aphid, ee-i-ee-i-o

Humans have perfected the art of farming. We have learned to create beautiful, healthy crops of fruits, vegetables, and meats to feed our masses.

Most of the landscape in the area where I live has been altered so as to maximize output from the plants and animals dwelling there. Once an area has been cleared for farming, care is taken to ensure that plants and animals other than those of the desired crop are suppressed.

Although the benefits of farming are felt far and wide among the human population in order to optimize our diet with little effort, the functional result of farming on the natural landscape is to suppress the natural biodiversity of communities that would otherwise inhabit such areas.

As in this farming scenario, a mutualistic relationship exists among different species of ants and aphids.

How Ants and Aphids Help Each Other

Aphids are small herbivorous insects that spend their entire life cycles on specific host plants. They excrete a sugar-rich substance called honeydew that is a prized resource for various ant species.

In exchange for this food source, ants provide the aphids protection from predators in the same way that humans give dairy cattle a safe environment for feeding in exchange for the milk they provide.

It has been documented that, in some particularly aggressive ant species, aphids are herded onto specific types of plants that are more productive and have positive effects on honeydew production.

Ant tending has been shown to increase honeydew production by up to 50 percent. This indicates that ants stand to realize large benefits by ensuring that their own aphids have a safe and nutritious habitat.

The aphid Chaitophorus populicola and the ant Formica propinqua exist in this mutualistic relationship. The aphids are protected by living in close proximity to the ants, while the ants gain the nutritional benefits from the honeydew.

In other words, without protection from their tending ants, the aphid populations are much more likely to be wiped out by predators.

The aggressive ants actively remove potential predators from aphid-inhabited trees, including other herbivores and competing ant species. However, in providing the aphids with this safe habitat, the ants affect the makeup of the communities present on the plant.

Overall species richness and abundance is greater on trees without aphid-ant mutualists than on trees where they are present. When aphids were experimentally removed from trees and the aggressive ants therefore abandoned them, there were increases in overall species richness (31 percent) and arthropod abundance (26 percent). This demonstrates that ants were effectively clearing the trees of both predators and competitors, thereby decreasing biodiversity, to ensure the success of their honeydew crop.

From an optimal foraging point of view, farming makes sense. Instead of all individuals hunting and gathering as independent units, taking steps to ensure that a viable food source is reliably available to all members of a population in a specific area seems like a good idea.

Tending ants have a pretty good thing going when it comes to their honeydew-producing livestock, despite the negative effects on other members of the community.

However, it’s important to note that the ill effects on biodiversity are at the level of the individual tree.

At a landscape scale, the integrity of the natural system remains intact, and the organisms shunted from the ant-tended trees take up residence nearby. Ants haven’t turned honeydew farming into a global commodity, as humans have with our farm products.

Farming provides ample nutrition to most humans, but the large-scale land clearing required for such practices, especially in diverse areas like tropical rainforests, reduces biodiversity until the loss is catastrophic for all other species involved.