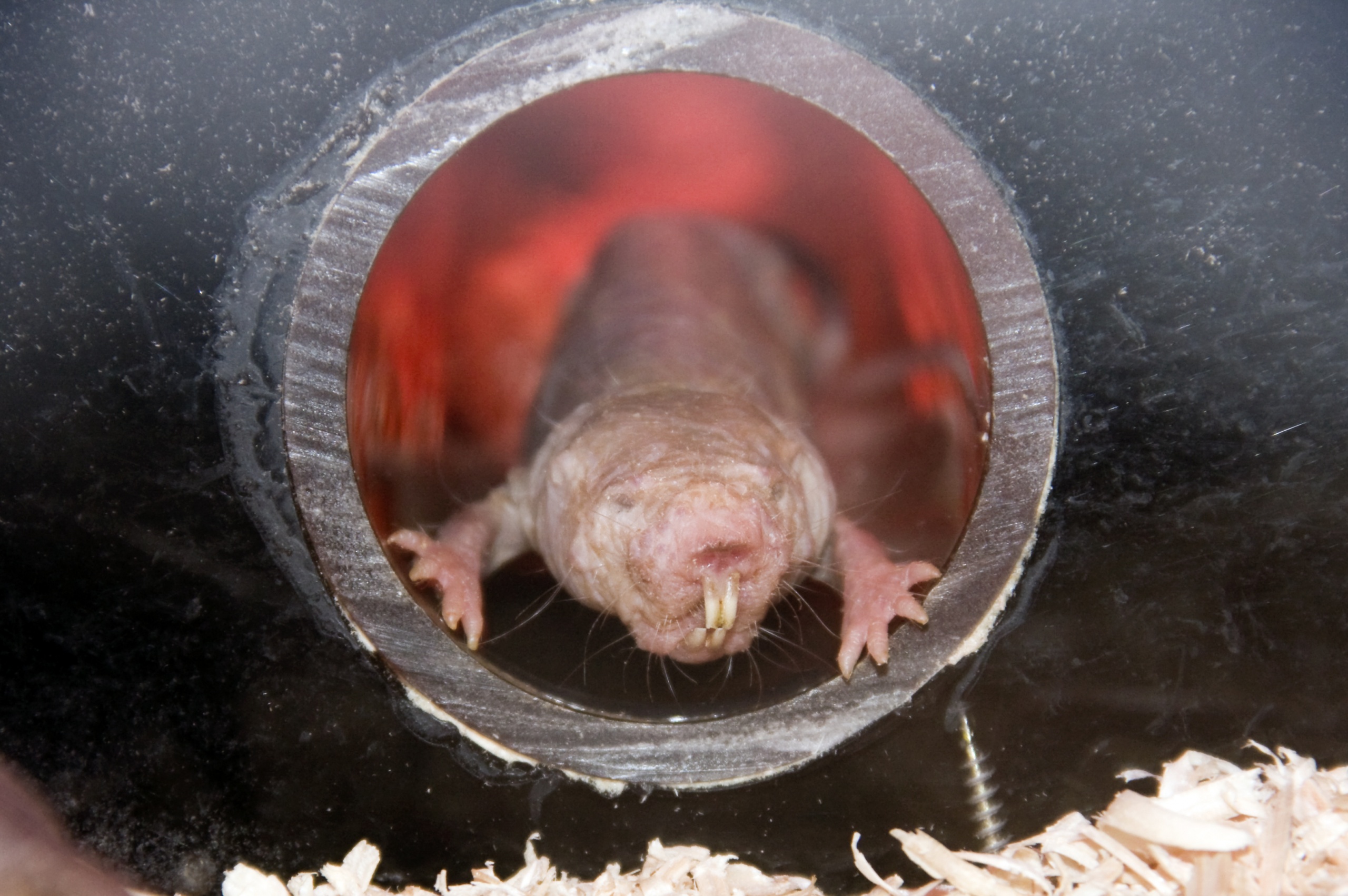 Naked mole rats live mostly underground in elaborate tunnels. They rarely come above ground for any reason other than to obtain food, defend the colony, or, in rare cases, found a new colony.

A specific chemical cue contained in the urine of the single dominant female keeps all other females from reaching reproductive maturity.

In this way, she maintains a total monopoly over reproduction with a relatively low level of dissension in the ranks.

What About The Males?

The queen does all the reproducing in the colony with the help of between one and three male partners.

All other subordinate males are also infertile but retain the ability to become fertile if the correct social parameters present themselves.

What Do Subordinate Naked Mole Rats Do?

Naked mole rat societies are the only mammalian societies known as being totally eusocial. They have a clear, pronounced, and irreversible division of labor among the infertile members.

What Happens If The Queen Dies?

If the alpha female naked mole rat dies, there is an immense battle within the underground colony between subordinate females determined to take her place.

Such intense fighting has major impacts of the functioning of the naked mole rat societies. In extreme cases, it may result in their dissolution.

Eventually, one female physically dominates all others to become the new queen.

A period of approximately six months ensues as she settles down and physiologically matures. She will then begin to secrete the “anti-maturing” compound in her urine to prevent the other females from becoming reproductive.

What Does The Naked Mole Rat Queen Do?

It seems like being the mole rat queen is a fairly cushy and powerful position. However, when one begins to break down what this entails the job becomes far less desirable.

The mole rat queen is little more than a baby-popping, newborn-suckling machine. Reproduction is continuous in this species. There is no breeding season, so the queen can become pregnant year-round.

Gestation time is between sixty-six and seventy-six days. The average litter size is twelve.

The spine of the queen elongates during each pregnancy, so she becomes much longer instead of wider. This makes sense for tunnel-dwellers.

Once the pups are born, they suckle exclusively from mom for two weeks. Then, they begin to incorporate other foods in addition to suckling for a few more weeks.

After this short period of “rest,” the queen will become pregnant again with another litter.

The long lifespan of the naked mole rat means that over the course of her reproductive life, a queen can have more than 900 pups.

Biologists have calculated that in the first two weeks postpartum when she is exclusively providing milk for her pups, she has to produce over 50% of her body weight in milk each and every day.

The milk of naked mole rats is very low in nutrition and high in water content. This is meaningful for a few reasons:

First, newborn mole rats are at risk for water loss through evaporation. They have no fur and have a higher surface area to volume ratio than adults. They do not develop the physiological ability to concentrate their urine until around two weeks old. Newborn mole rats need a lot of water for the first few weeks to survive.

To produce more than half of her own body weight in milk, even diluted milk, mom needs to be ingesting a massive amount of nutrition and water herself.

She has many helpers bringing her an endless supply of water-rich tubers and other high-moisture foods. A queen mole rat consumes up to ten times more than non-reproductive females.

Although on the surface being the queen appears substantially cool — being the only female with sexual access to males, having all the food one could possibly eat brought directly to you, and having many helpers to attend the babies once they come along — overall it seems to me like this is one completely overworked mom.